The activities on the Borki reservoir and the colmatation ponds as well as the restoration of the Mleczna River are very advanced. The reconstruction of the main weir on the Borki reservoir is coming to an end, and after directing the waters of the Mleczna River to the weir, works related to the construction of a fish ladder on the left side of the weir will begin. At the same time, works are carried out in the colmatation ponds. These works should be completed in the first quarter of this year, which will enable the reservoir to be filled with water at the end of the second quarter, so that the final tests of the damming structure can be performed and the tank can be put into use. The solutions used in the task are not only supposed to reduce the flood wave on the reservoir thanks to the reconstruction of the main dam, but also to enable fish migration thanks to the newly built fish pass. In addition, the pre-treatment elements used in the colmatation ponds are to reduce the flow of contaminants to the reservoir. In the coming days, the reservoir's canopy will be cleared of vegetation, which will enable the removal of sediment from the bottom. Installation works of aeration systems and floating islands are remaining to be carried out. The main reservoir will be equipped with fountains powered by a power plant using renewable energy sources, i.e. photovoltaic panels mounted on the roof of a floating equipment rental and three small wind farms built on the crown of the dam. The fountain system will ensure water mixing to maintain its good quality and additional aeration. Coastal rush vegetation zones will be maintained to improve biodiversity and habitat sites. 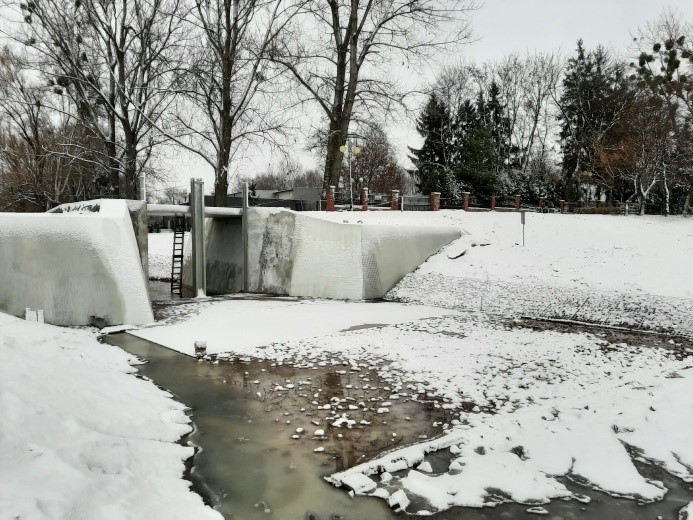 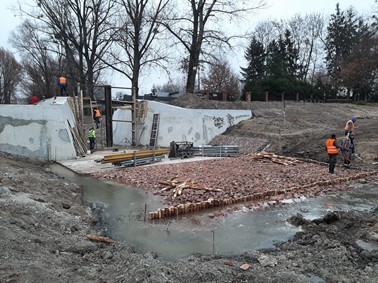 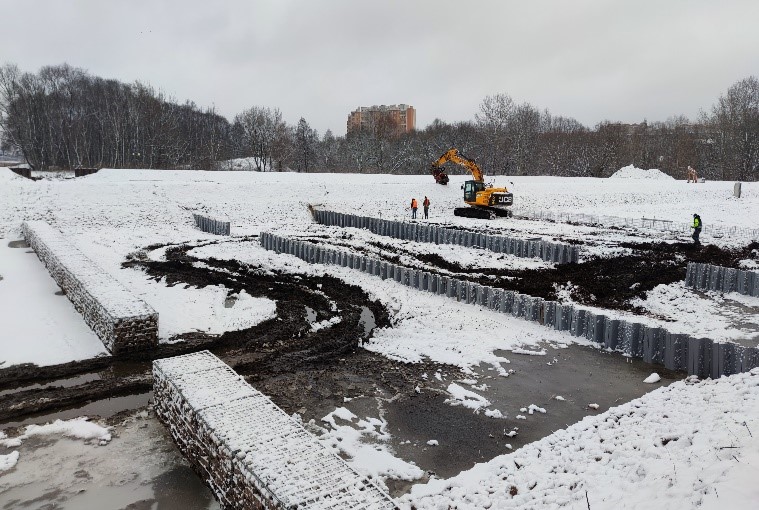 Fot. No 1,2,3. Photos of the main weir on Borki reservoir and collmatation ponds (own source)

On the Mleczna River at the height of the Boulevards, construction works are currently underway to increase the retention capacity of the river by slowing down the outflow of its waters and keeping them in the landscape. To this end, the meandering of the river has been carried out on its regulated section and it is planned to raise its bottom of the riverbed and create places of bays, which are currently being constructed on its left bank as part of the project. 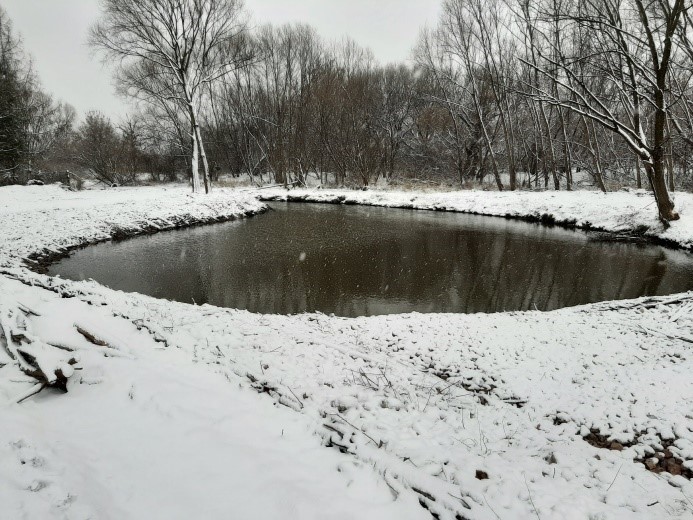 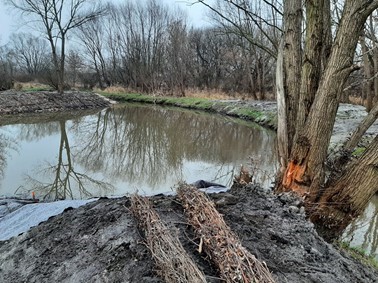 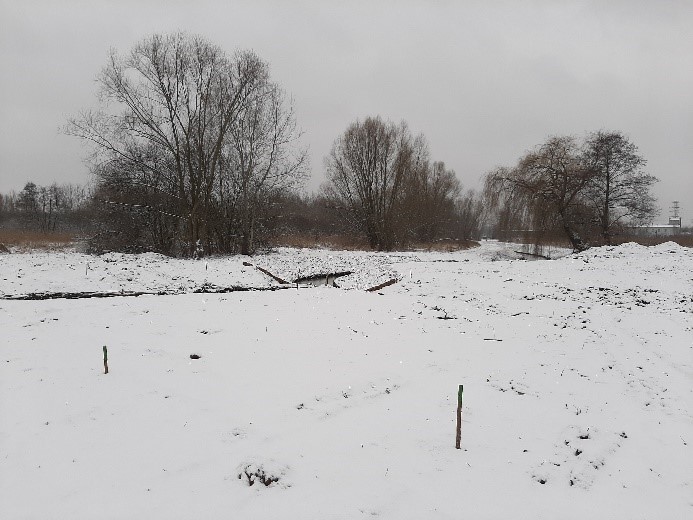 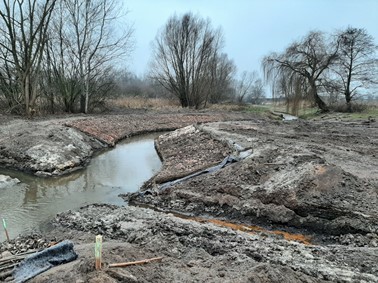 Fot. No 4,5,6,7. Photos of construction works on the Mleczna River (own source).

The difficult conditions caused by the high water level in the Cerekwianka River and its flood plain, converted as part of the project into a flood polder, mean that it is currently not possible to carry out the scope of work involving the formation and compaction of slopes. As part of the preliminary work, an access road to the construction site from Formierska Street has already been completed, trees and bushes have been cut, the area has been cleaned up from the waste there, and a drainage structure has been made at the bottom of the polder and its canopy has been shaped. The works are currently underway to prepare the site for the shaping of the middle and upper polders, together with inlet, discharge and inter-zone structures. 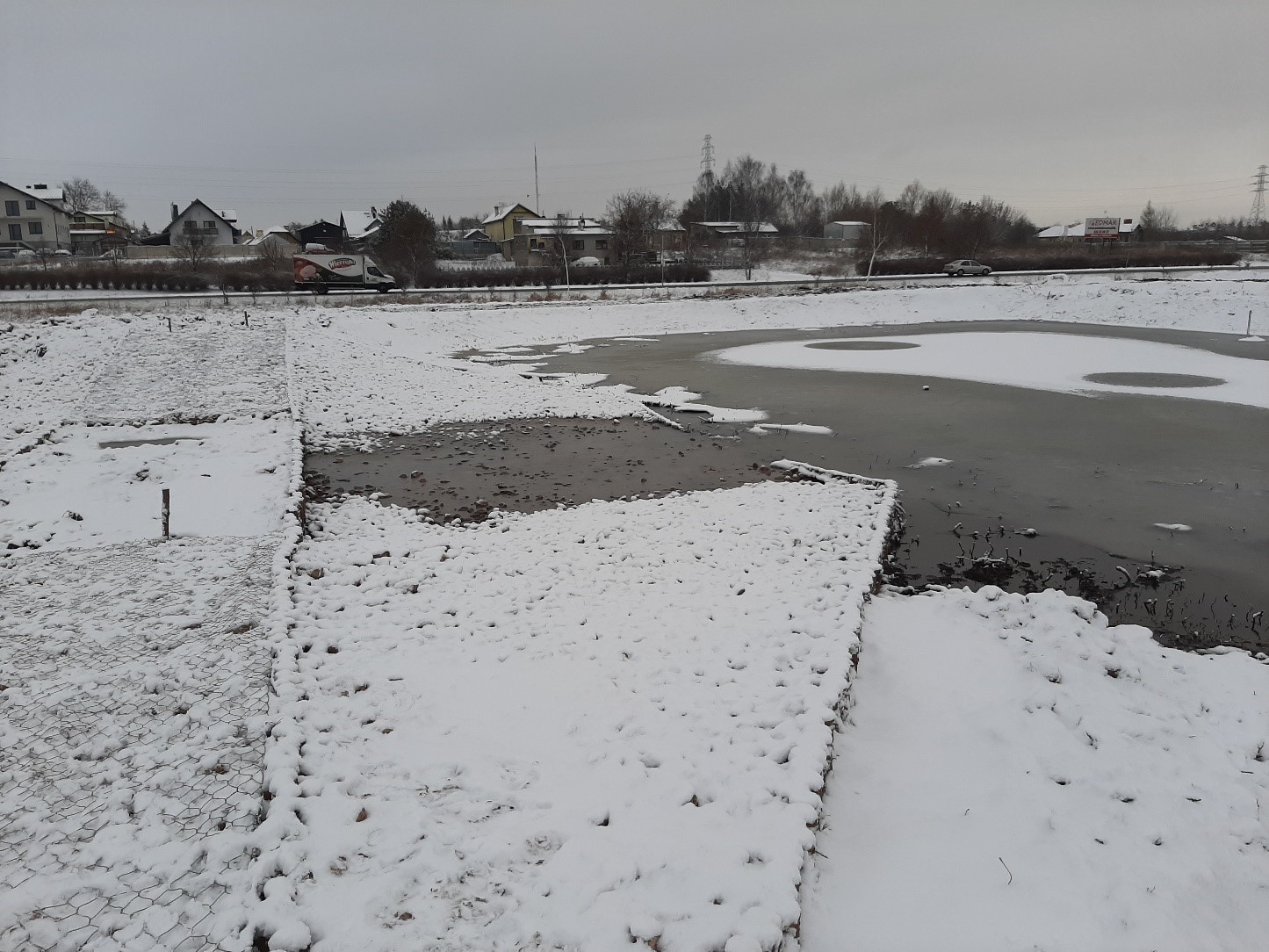 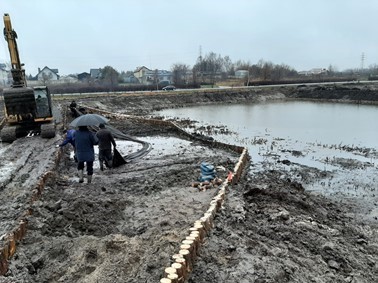 Fot. No 8,9. Photos of the built part C of the polder on the Cerekwianka River (own source).

The last of the large-scale investments in the LIFERADOMKLIMA-PL project (construction of a flood control reservoir on the Potok Północny with a sequential sedimentation and biofiltration system) is still awaiting the decision of the Mazovia Voivodeship. Nevertheless, in November 2020, the Radom Water Works Company announced a tender procedure for this investment. The selection procedure for the most advantageous offer is currently underway. In the area in question, construction works haver commenced as part of the neighboring investment, the investor of which is PKP PLK, ie the modernization of the railway line No. 8 on the Warka-Radom route. As part of this task, a new railway flyover will be built in the embankment of railway line No. 8 ensuring the flow of water planned to be transferred through the Municipal Water Works riverbed. 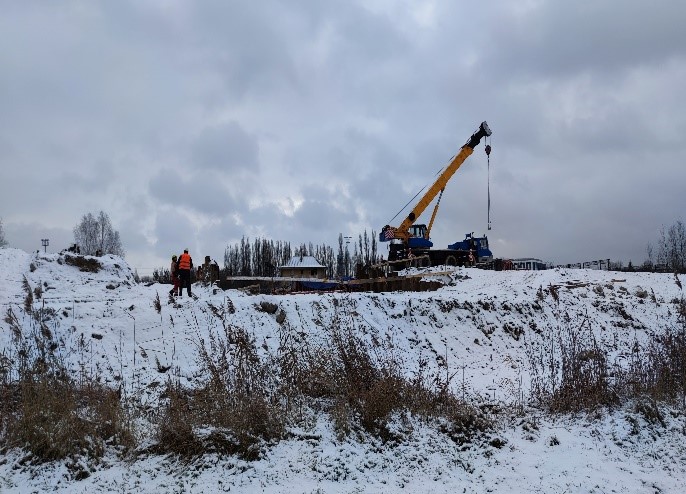 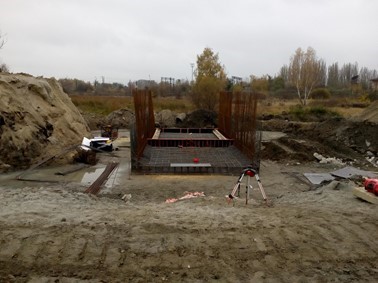 Fot. No 10,11. Photos of modernization of the railway line No. 8 on the section at ul. Olsztyńska (own source)

Winter, or at least its course so far, does not deter contractors from making progress in the LIFE project. A few days of temperature drop around -20oC and the snow cover will certainly slow down the course of this work for a while, but we hope that it will not be long. If the rest of the winter and favorable conditions in spring do not threaten the smooth implementation of the project, we plan to complete the lasting investments as soon as possible. Unfortunately, sometimes not only weather issues, but also administrative and environmental restrictions make it difficult to implement investments on time.